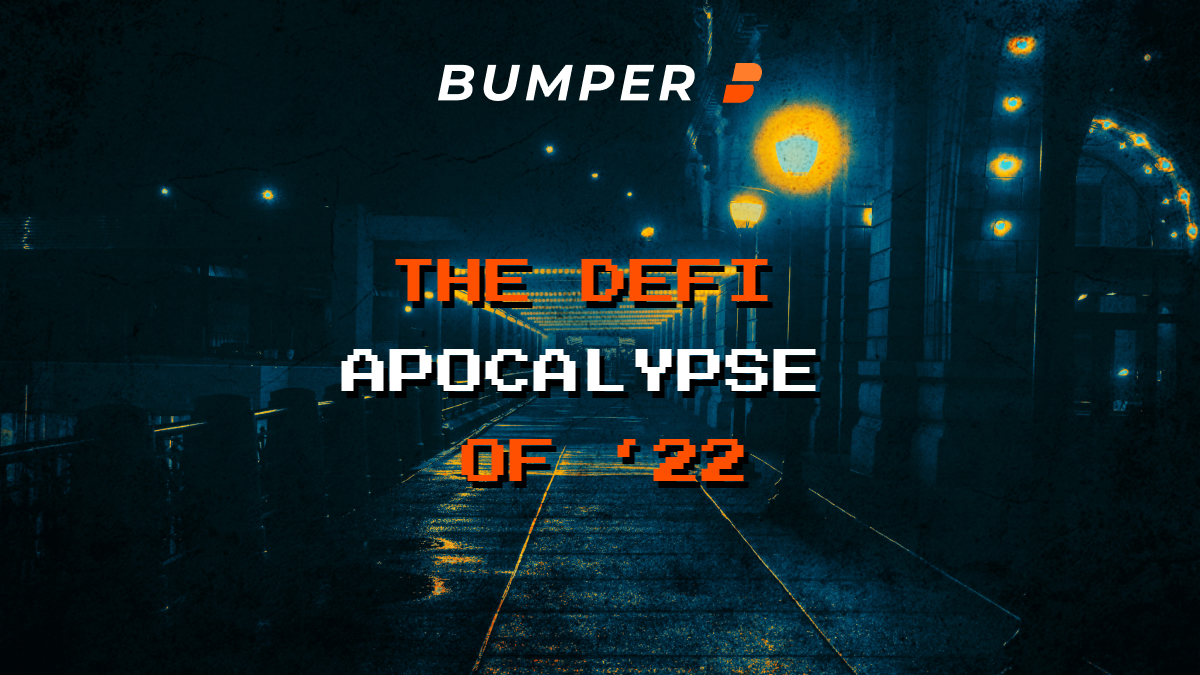 The DeFi Apocalypse of 22

The first half of 2022 has been nothing short of a DeFi apocalypse, triggering the biggest bear market ever seen in the history of crypto.

What makes this bear cycle different may well be the result of a sudden lack of liquidity in global markets, caused by Central Banks announcing quantitative tightening policies in an attempt to get spiralling inflation under control.

If ever there was a lesson to be learned about finance, what we are witnessing right now is a great example of what results when money is printed out of thin air.

But it’s also been driven by the other usual suspect: Greed.

DeFi was meant to provide an alternative to the rigged financial game which Wall Street and the Banksters, who certainly aren’t averse to a bit of bribery and corruption, have enjoyed for as long as centralised money has been a thing.

Indeed, Decentralised Finance was supposed to bypass institutional hegemony and give power to the people, and allow entrepreneurs to develop novel products and services in the space.

But instead, in some cases, DeFi has become corrupted. Was this the inevitable end result of poor planning, insecure codebases, intemperate greed, or something else entirely?

What happened to DeFi?

It was all going so swimmingly well last year. Crypto adoption was at an all time high, Institutions were no longer wondering “if” they should be adopting crypto positions but “when and how much”, and with Bitcoin running to a new all time high of just under $70,000 it sure looked like we were entering the mainstream consciousness.

Then, it all started to go pear-shaped. Although it wasn’t until mid 2022 that the dam finally burst, there were certainly cracks forming well before this time.

For many in the crypto-space, the wake-up call didn’t happen until May 2022, when Terra-Luna fell from once massive heights to land spread-eagled and splattered all over the pavement.
‍

Days later, CeFi lender Celsius teetered on the brink, resulting in it suspending withdrawals, and shortly after, Bancor’s flagship Impermanent Loss protection, touted as a means of protecting liquidity providers from the effects of volatility was halted… due to (wait for it…) volatility!

Massive risk exposure and a liquidity crisis exposed the recklessness of massive funds such as 3 Arrows Capital, and the resulting contagion threatening many others in the space, including sending some big names such as BlockFi scrambling for liquidity and Voyager Digital filing for bankruptcy. Even if bailouts, restructures and rapidly-enacted changes do manage to bring about some much-needed stability, public perception of DeFi (and to an extent crypto in general) has been shaken to its very core.

Whilst the world was reeling from Covid lockdowns, DeFi absolutely exploded, entering a phase which can accurately be described as a kind of digital Dutch Tulip mania on steroids.

Utility-less meme-coins named after food items were making 1000x gains, NFT’s of Apes and Dogs were making artist creators millions, and Gen-Z YouTubers bragged about their insane gains, not because they’d created something of value to mankind, but simply because they knew which buttons to press on their phone.

The era of high intensity yield-farming was here, and platforms were literally trying to outpace their rivals for who had the biggest APY. Ridiculous returns were being offered, with double and triple digit annual yields becoming commonplace.

The thing is, as any third-rate economist could tell you, this is pretty unusual, and this kind of return looked remarkably suspect.

Some of the smartest guys in the room tried warning us about what was coming, but just like nerdy Ghostbusters character Louis Tully, they wound up locked out of the party relegated to the corridor, ignored by everyone, and drowned out by the din of the magic money-printer going ‘brrrrr’.

In Mid 2020, Vitalik Buterin believed massive DeFi yields would be short lived, noting that protocols simply cannot inflate forever without devaluing their underlying assets, whilst Yieldfarming.info creator Weeb McGee went on the record as saying he believed yield farming to be “an unsustainable zero sum game”.

Galois Capital CEO Kevin Zhou was warning about Terra for months before it collapsed, saying that he expected it would “collapse on its own, but if someone attacks it, it will collapse faster”.

The fact is, DeFi’s uber-yield generating fallacy was a gigantic house of cards built on shifting sands, and all it took was one tiny wafer-thin mint too many to cause the engorged belly of DeFi’s Mr Creosote to finally burst.

An increasing spate of increasingly sophisticated hack attacks didn’t help either, made worse by the fact that in some cases it seems, early warnings of vulnerabilities went unheeded.

For example in the case of Harmony, which saw its Horizon bridge hacked to the tune of $100M in ETH, BNB and BUSD on June 22, 2022, the most likely attack vector was foreshadowed by @apeDev almost 3 months prior, with the author predicting a 9-figure theft being possible (even likely) if the team didn’t do something about it. Which they didn’t, and then, of course, it actually happened.

Probably the most surreal attack was against Ronin in March 2022, in which the team didn’t even notice over $624M had been drained from their bridge until almost a week later, and only then after a concerned user, who had been blocked from making a withdrawal, highlighted the missing treasury funds.

There were no shortage of Rug Pulls either, but that didn’t stop billions being dumped into such obvious scams such as the Squid Game coin, which saw the token named after (but in no way associated with) the cult Korean show run up to over $2800, only for its liquidity to be drained in ten minutes flat by the scammers who launched it.

Are we all the bad guys?

The result of many bad actors in the system saw billions of dollars in value literally vanish overnight (sometimes along with the perpetrators too).

Like a feeding frenzy of crypto-sharks, the inevitable outcome was a blood-red market, leaving many unsuspecting investors, most of whom were lured by self-styled crypto-influencers, utterly wiped out.

The sagely wisdom that says you should never “invest more than you’re prepared to lose” clearly went over many heads, with some betting everything, including pensions, their kids' college funds, and in some cases even their homes, on the promise of life-changing returns.

Crypto Pragmatist Jack Niewold believes it ultimately comes down to us, all of us, to share some of the blame. Essentially, his thesis goes, we let it happen because we should have known better. To a degree, he’s right, and even your luddite forebears could have told you what would occur. Did your Grandpa tell you “if it’s too good to be true, you should pile your entire life savings into it”?

The noobs you can kind of forgive, but many of us who’d been in the game for years, those who spent many hours discussing the deep philosophies entrenched in blockchain technology, ruminating on how decentralised systems enabled a new age of libertarian value-exchange, free from the control of the notorious Central Banksters, where were we when the good times were rolling?

For the most part, many of us were caught up in the hype, happy to take the wins, but ignoring the consequences of watching DeFi-become-CeFi-become-Wall Street.

That’s not to say everyone is responsible for the actions of a number of bad actors. But, if we’re ever going to learn anything from the debacle, it’s probably useful to recognise that, at some level, by participating in the mania, many of the crypto OG’s share at least some of the responsibility simply by feasting at the same table as the bad guys who damn near killed DeFi.

As the dust settles, and we emerge blinking from the bunkers to survey the devastation, the events and synchronicities which triggered this latest series of crypto collapses will become evidently clearer. As will the emergent consequences.

The whole episode will likely bring in a whole heap of additional regulation, the brunt of which will likely bring the low-hanging fruit (most notably centralised exchanges) under the microscope of the SEC and other regulators, and what this means for retail crypto investors and users is yet to be seen.

But there is salvation on the horizon. In a kind of crypto ‘Road to Damascus’ moment, the scales have fallen from the eyes of the crypto-bro’s, the Church of the Mega-Yield has been exposed as an unsustainable Ponzi scheme, and the entire congregation has finally decided it might not be a good idea to drink from the Font of the Holy Triple-Digit APY anymore.

Due diligence is once more a thing. Maybe, just maybe, next time we will be a little more cautious, and in this, there’s room to be optimistic.

As interoperability becomes even more important, governing bodies (especially DAO’s) will likely take a more active role in ensuring that they enter into partnerships which don’t just make money, but which have similar levels of commitment to security, transparency and accountability.

This is DeFi’s saving grace, with many good actors out there who are striving for higher standards.

So, although this has been a tough year for DeFi, and its fall from grace has been nothing short of biblical, there is good news.

Lo, from the ashes of the DeFi apocalypse will arise an army of protocols, well-designed, transparent, provably fair, interoperable, and which hold true to the fundamental tenets which brought most of the OG’s and Degens into the blockchain world in the first place.

As DeFi resurrects itself over the coming months, projects in this space will do well to remember to recite these old catechisms, lest they sink, once again, into temptation.

The view from Bumper

During this first half of 2022, we have been focused on the technical development of our novel crypto price protection protocol.

In our article entitled “the State of Play”, we provided an overview of where Bumper was at this midpoint in the year, and these factors position us well as a groundbreaking protocol for the inevitable revival of decentralised finance.

Despite this year's apocalypse, we remain bullish on DeFi. We saw a new breed of digital innovation emerge from the Dot Com implosion at the turn of the century, and we believe that, despite the sudden fall-from-grace of some of the players in the early days, DeFi will continue the relentless journey towards more novel, inclusive and fair financial products and services.

We recognise that the protocols which will both survive and thrive through this period will do so because they are committed to innovation, security, transparency and, most importantly, solving real-world problems.

This is the path we’ve chosen to walk, committed to these fundamentals and eschewing the ‘profit at all costs’ mentality, instead keeping our focus on adding real value through long term sustainability, functionality and solvency.

We encourage those who really care about decentralised finance to read our Litepaper, and join our community and find out for yourself what makes Bumper truly innovative and novel. 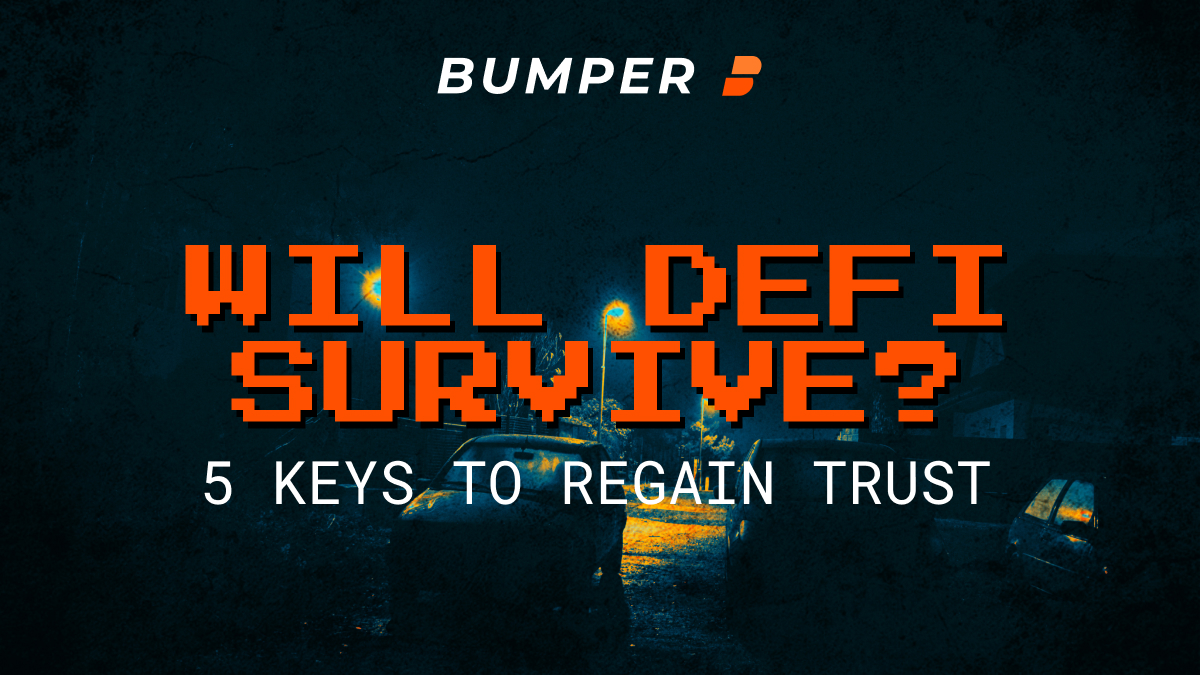 Will DeFi survive? The 5 keys to rebuild trust

After the crypto crash how will DeFi survive, and what do projects need to do to rebuild trust in the DeFi sector?