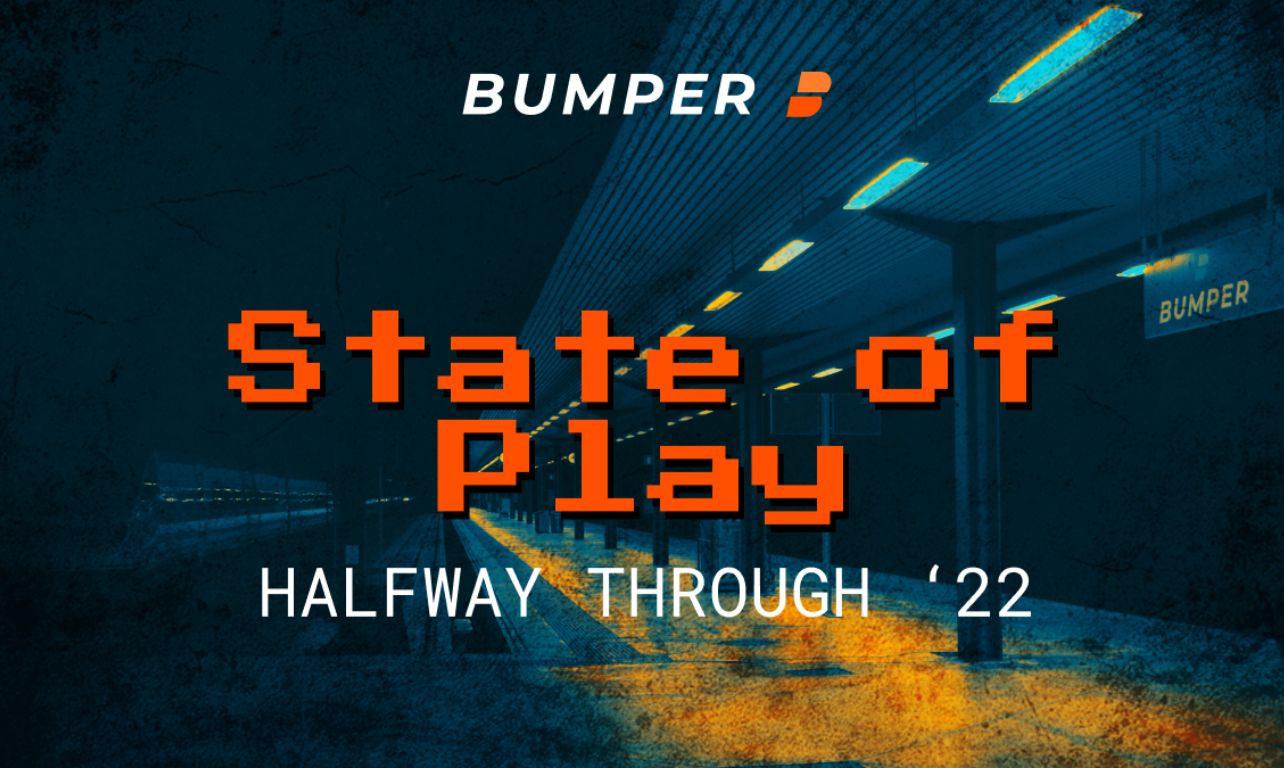 The State of Play - Halfway through 2022

Around 18 months ago, we embarked on an incredible journey. We aimed to bring something completely new and unheard of to the world of crypto which had never been done before. We have learned much along the way, and, for sure, we may not have always got everything right immediately. But, hey, when you’re inventing something completely new, you always get it perfect the first time... right?

Now, midway through 2022, we thought it was time for us to give a full roundup of where Bumper is at, especially given the context of the events in the wider crypto market so far this year.

We'd also like to take this opportunity to dispel the FUD, and give all our supporters, detractors and FUDsters alike some more information as to where we are, and what you can expect from Bumper in the not-too-distant future.

If you’ve been following our regular fortnightly Sitreps, and Office Hours livestreams with the Bumper co-founders, you will be aware that we discussed the delays to our protocol launch.

One of the main reasons for delay was the level of work involved in developing arguably one of the biggest codebases in the DeFi space.

When we delivered the code to the auditors in May, it weighed in at over 11,000 lines of code with over 100 smart contracts.

To put that into perspective, it’s worth comparing our codebase with other top DeFi protocols, to get a clear understanding of the sheer size and complexity of Bumper:

Development, testing and auditing something of this magnitude takes time, and we are now in the latter stages of ensuring that we have covered all bases and developed a truly valuable and robust protocol.

Finally, in light of some of the shocks we’ve seen in the DeFi space recently, we believe it’s better to be absolutely laser-focused first and foremost on security and stability, and if this means it has taken longer than expected to release Bumper, then, for the safety of our users, so be it.

That said, Bumper is going to be launched very soon, in a phased manner. We feel that a stepping-stones approach is infinitely more secure than going straight to an all-bells-and-whistles release, and gives us time to assess the real-time impact of the protocol and respond accordingly.

Some of the extended functionality (including DAO governance, fungibility of Bumpered Assets and so on) will be released later down the line. This means we can make absolutely certain that the protocol is performing ‘in the field’ as intended before we extend it out as a fully decentralised model, with enhanced functionality.

It is worth noting, however, that as the development of Bumper has progressed, more features have been added by our engineering team, some of which are new, and others that were implemented well ahead of their original schedule in the roadmap.

Our goal was always to build a truly unique and powerful solution to crypto price volatility. It doesn’t make any sense to rush it and potentially introduce mistakes by being focused more on deadlines than over performance and purpose.

For this reason, we have concluded it is better not to give hard and fast deadlines until we are absolutely certain we won’t have to push them back.

The feedback we’ve had from some of the most active members of our community does seem to support our approach. You guys know who you are, and we are truly grateful for your input.

During 2022, we have welcomed some new members to the Bumper core team, hiring some exceptional talent to work alongside the co-founders.

We know that solid partnerships will only help enhance Bumper’s value proposition, widen our exposure in established communities and increase the utility of the BUMP token, and subsequent adoption of the Bumper protocol.

Over the last year, Bumper has announced a number of partnerships with key industry players, which include InsureAce, Aurora, Metis, Panther and MilestoneBased, among others.

We are currently engaged in further high-level talks with a number of high profile businesses and protocols, all with the goal of creating mutually beneficial and purposeful partnerships, and we’ll make further announcements as these are finalised.

Addressing the FUD-sters and Naysayers

Unfortunately, we have endured a fair share of FUD and negativity in comments on social media recently, with some people espousing the (baseless) accusation that Bumper is a scam, and it’s time for us to address this head on.

For those who genuinely think Bumper is a scam, well, clearly, we aren’t very good at being crypto-crooks, seeing as how we keep spending a great deal of time, energy and money on perpetuating this highly elaborate ruse, with our team of developers, UI/UX designers, smart contract engineers and economic architects working tirelessly over many months to develop the Bumper protocol… and all whilst failing to run off to the Bahamas with the money.

Like all the other scams and rug-pulls, we’d surely have disappeared months ago, instead of continuing to work on developing and enhancing the protocol, spending vast amounts of money on audits, simulations, expanding our team, and visiting numerous top-tier expos and crypto trade shows such as Bitcoin 22, Consensus 2022, Permissionless, Token2049, and more.

Some people have even suggested we haven’t been giving updates to the community, which is strange, as every fortnight we host Office Hours livestreams on YouTube, followed by After Hours AMA’s with the co-founders in our Discord channel.

We also release detailed Sitreps and development updates on alternate weeks, and we’re active on social media, and now focused on expanding the networks we operate on, as well as improving how we engage publicly.

If Bumper is a scam, it’s clearly so inept that it would go down as the most incompetent rug-pull in history.

On the other hand, maybe, just maybe, we’ve actually been busy, with our heads down, developing, testing and deploying one of the most unique and valuable protocols in the DeFi world: a provably-fair, stable and secure system which has the potential to transform the crypto-space.

We appreciate that many token holders may be frustrated at the large drop in the price of BUMP since it was launched, and this is a result purely of users selling into the market, for whatever reason. We can assure you that no member of our team has sold even a single token to date.

It’s worth noting that the first half of 2022 has seen a steady (and sometimes steep) decline in the general crypto market. This has resulted in pretty much every single cryptocurrency being down well over 60% in the year to date, with many of the world’s top protocols losing similar (and in some cases, more) value than BUMP, despite having fully operational protocols and huge communities of active users.

When we release the protocol, BUMP will be required to open positions, and this utility will ultimately be the catalyst which drives demand for the token.

The first half of 2022 has highlighted how much of a need there is for the Bumper protocol, and we are genuinely excited about where we are right now.

In a time of heightened uncertainty in both the crypto-sphere and global markets in general, the need for Bumper to provide both price protection as well as a provably-fair and sustainable solution for yield generation for liquidity providers, has never been clearer.

The question we are asked most often is when the protocol will be available for use, and what this tells us is there is a clear demand for it.

As time has passed, we have become more and more aware of the different use cases for Bumper, some of which open the door to innovative solutions to as-yet-unsolved problems in the DeFi space. As occurred during the last crypto winter, this is when it’s time to innovate, and Bumper does exactly that.

For those who may have concerns about Bumper, we encourage you to come and join us in our Discord, participate in the conversation and actually talk to us and ask questions. We like questions, and more importantly, we are listening, and responding, to our community members.

Again, we would like to acknowledge and thank those in our community who have continued to engage and support Bumper.

What you can do to help Bumper grow

Our focus over the coming weeks, alongside the launch of the protocol, is to spread the word about Bumper, far and wide.

With that in mind, we are asking potential users to take 1 minute to complete this survey, to help us gain some understanding of the current sentiment in the market. Help us to serve our community better and click here to open the survey.

With a proactive community, Bumper will achieve exponential growth and the resultant demand for the token will increase. 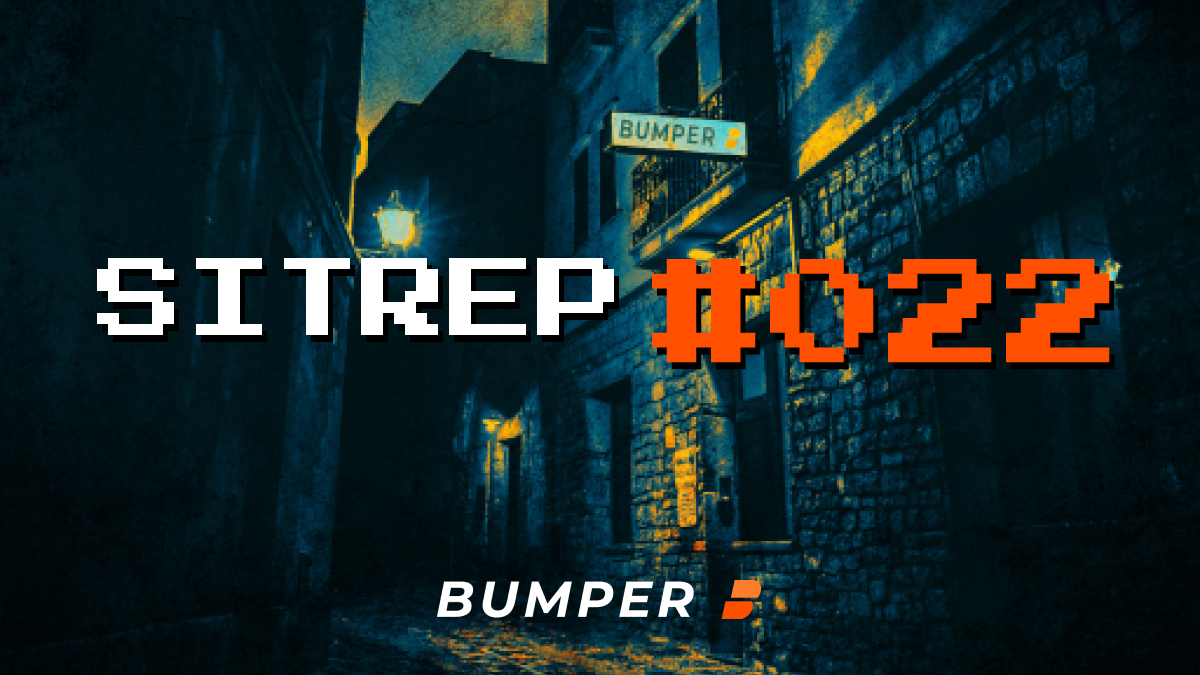 Sitrep 022: The latest Bumper updates and news, including some of the results from our Falkor Alpha testing, a call for Beta Testers, and a welcome to our new community moderators. 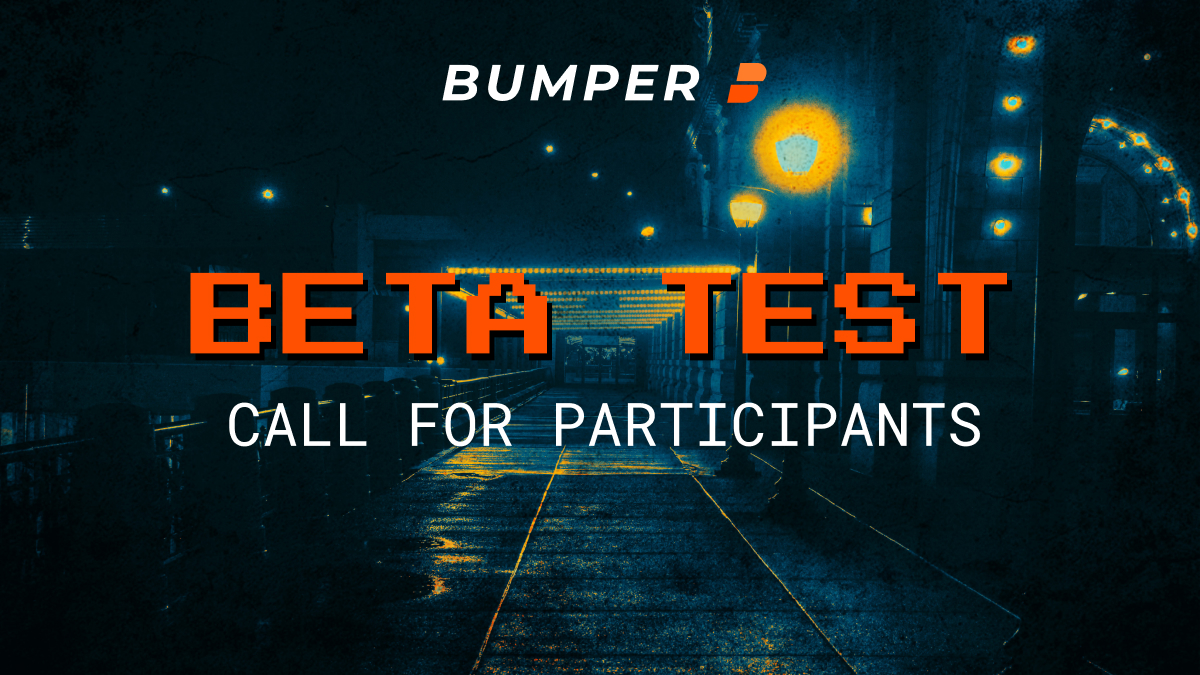 We want YOU... to be a beta tester for the Bumper Falkor release. Come and provide your feedback, and earn totally wicked rewards!