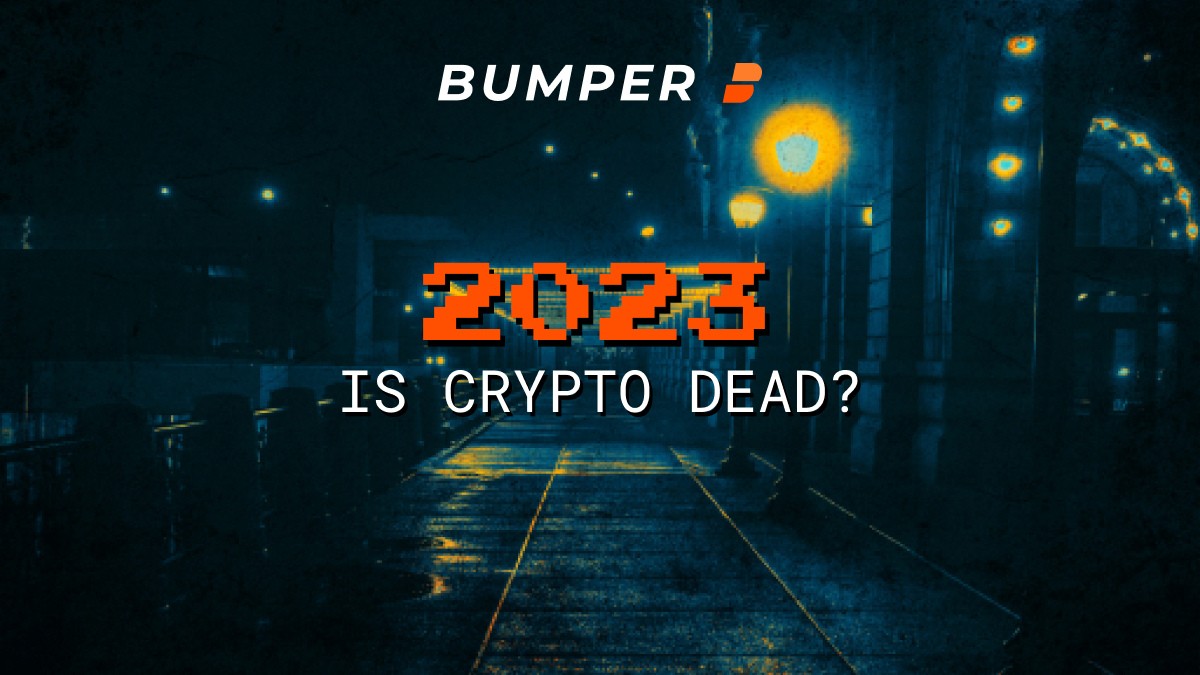 The state of the crypto market in 2023

But what happened? How did we get here and is crypto dead? It’s a long story (and not one which we’re going to go into too much detail about in this article) featuring some high-profile failures, like the collapse of Terra Luna and the FTX bankruptcy, which have damaged trust in the industry.

Plus, the global economic situation hasn’t exactly been rosy, leading investors to reduce their exposure to risk-on assets, including of course crypto. In summary, let’s just say that 2022 has not been kind if you’re a crypto hodler.

Is crypto dead, or just taking a nap?

Why do some people think crypto is dead? Well, there are a few reasons.

Clearly, that’s a pretty steep drop, and for many who bought in the preceding year, almost all are now underwater. This of course has led some of the doom-mongers to declare that the bubble has burst and that crypto is dead simply because the number of people making rapid fortunes just by buying seems to be yesterday's news.

Then there’s the issue of inflation. Many investors thought that crypto was a great hedge against inflation, but unfortunately, that hasn’t exactly panned out, certainly in 2022. While most currencies have been devaluing against real-world assets, cryptocurrencies in general fell in value faster.

Then there’s the whole “pyramid scheme” thing. Some people, including the Spectator columnist Ross Clark, argue that crypto is little more than a pyramid scheme, a way to redistribute wealth from latecomers to the gold rush to those who got in early. They say that, like all pyramid schemes, it has a brief and finite life, and that many of the new “get-rich-quick” schemes like NFTs have already come and gone.

Obviously, none of this was helped by the great crypto scandals of 2022, in which once revered crypto CEOs, including Sam Bankman-Fried and Do Kwon fell dramatically from grace. When even your crypto-Luddite parents are asking you if you “got hurt in the FTX thingy” over Christmas dinner, you know that it was probably a big deal, even in normie circles.

With arguments like these being pumped out by the mainstream media, it’s easy to see why many would-be investors are understandably nervous about getting into the space right now.

Crypto isn’t dead, you’re being conned by those who want to control you.

Contrary to this apparently popular opinion, those of us who actually understand the cryptosphere and what it means, far from believing crypto is pushing up the daisies and having joined the ranks of the choir invisibule, that it’s just taking a short nap.

One thing about 2022 was that it was the year that the world finally got confirmation that the zeitgeist messaging which most people take for granted was somewhat, well, contrived.

The Twitter files exposed government collusion with Big Tech and the mainstream media was forced to scramble into damage control.

We discovered that there were far-reaching connections between nefarious bad actors and lawmakers and regulators who were happy to turn a blind eye when it suited their lobbying efforts.

We saw apparently ‘liberal’ Western governments impose unprecedented and unconstitutional actions against their own citizens for daring to protest draconian laws, such as the raid on the Canadian truckers who shut down Ottowa for a month, using lawfare and asset-theft to bring those damned troublemakers to heel.

And most importantly, throughout all this, the central banks haven’t stopped in their determination to impose their own programmatic CBDC’s upon us all.

If you are in any doubt whatsoever as to whether CBDC’s will be good for the average man in the street, one only has to look to Davos to see the emerging control features that the powers-that-be are having wet dreams of implementing through enforced digital money.

Because the banksters, governments and the media want you to simultaneously believe that cryptos, as we know them, are frauds, digital Ponzi-schemes only used by criminals and fools — but their lovely shiny CBDC cryptos are going to be simply marvellous and usher in a whole new world of wonders. The centralised planners don’t hate crypto — they just hate crypto that they don’t get to control, like Bitcoin and Ethereum.

Yet, people aren’t listening to them anymore. Trust in the media is at an all-time low and the establishment is losing its grip on the hearts and minds of citizens in almost every country.

Don’t believe us? Well, according to 99bitcoins, in its short lifecycle, there have been no fewer than 467 Bitcoin obituaries penned by major ‘authorities’ on the matter, from such establishment darlings as Forbes, Bloomberg, Fortune and Yahoo Finance — that’s the equivalent of about one pronouncement of shuffling off this mortal coil every 10 days on average.

It’s not really a stretch to assume, therefore, that the very media companies who are all connected with the big businesses who have a revolving door into government and banking are trying to con us all that decentralised, controlled by nobody Bitcoin, where code is law is bad, but programmatic CBDCs which can be turned off when you’ve been naughty are good.

The technology underpinning crypto is alive and well

Whilst all the chaos in the market was popping off, major blockchains such as Bitcoin and Ether have just carried on, oblivious to the market panic and the FUD, simply because, unlike their human counterparts, blockchains couldn’t care less about the money — they are simply great technologies.

Those talking heads calling out the death rattle of crypto conveniently didn’t mention major upgrades, such as Ethereum’s long-awaited Merge. If crypto is dead and buried, it seems nobody bothered to tell the developer communities who just carried on building and refining the tech regardless of price.

Furthermore, especially when it comes to Bitcoin, the fact remains that nobody has yet come up with a suitable way to regulate completely decentralised currencies which have no respect for borders or the whims of centralised diktats.

But what about all the scams and rug pulls?

Sure, there’s a whole lot of dodgy in the crypto world. But then, in what financial ecosystem doesn’t that exist? Whilst the latest dog-moon-pump-super-profit coin with its anonymous team behind it might make explosive gains in its first 20 minutes of life, you can probably bet the entire market for such a token will collapse after a couple of days.

There’s a really big difference between a project that takes its time delivering because it wants to get the tech right and make sure users' funds are safe, and those who are chasing the TVL and damn the actual utility of the project.

As always, do your own research, and never take financial advice from a bloke on Twitter.

When bear markets happen, developers pull up their bootstraps (literally) and build. It’s what they know, it’s what they do, and it’s always been this way. In fact, if it wasn’t, then perhaps Edison wouldn’t have kept trying to invent the commercial electric light bulb after thousands of failed attempts.

In fact, as the song goes, it’s in times like these, you learn to live again. Whilst the crypto speculators and investors were running around trying to douse the flames of their burning hair, the devs just did what they always do. They learn, they test, they implement, they tweak and eventually, they unveil.

This is what DeFi was originally meant to do — provide tools for everyone to participate in finance without having to ask permission, fill in government-mandated requests or sit a test to see if they were sufficiently intelligent enough to make choices with their own assets.

If you want to really understand the difference between cryptocurrencies and CBDC’s, it’s not being treated with kid gloves by the nanny state that is quite happy to tax you to death whilst the lawmakers all seem to make ten times their parliamentary salaries, but most of us plebs need to be protected from making poor financial decisions.

We’re proud to be one of those companies who are innovating during this time. At Bumper, we’re creating a completely revolutionary crypto risk market with a very simple idea — protect our users crypto from downside volatility. In other words, a way to hedge against the very price drops and catastrophic black swan events that have plagued 2022 without the downsides of existing risk management tools.

But we’re far from being the only project which continues to create interesting new products and services of course. Will 2023 bring major crypto and DeFi innovations? More than likely, and each of them will have the benefit of knowing and understanding precisely what happened in 2022 to bring such chaos to the markets — namely, centralisation (and not a small amount of fraud).

So is crypto dead? You must be joking. It’s just taking a nap, and when it wakes up again, rested and refreshed, what happens next might astonish everyone. 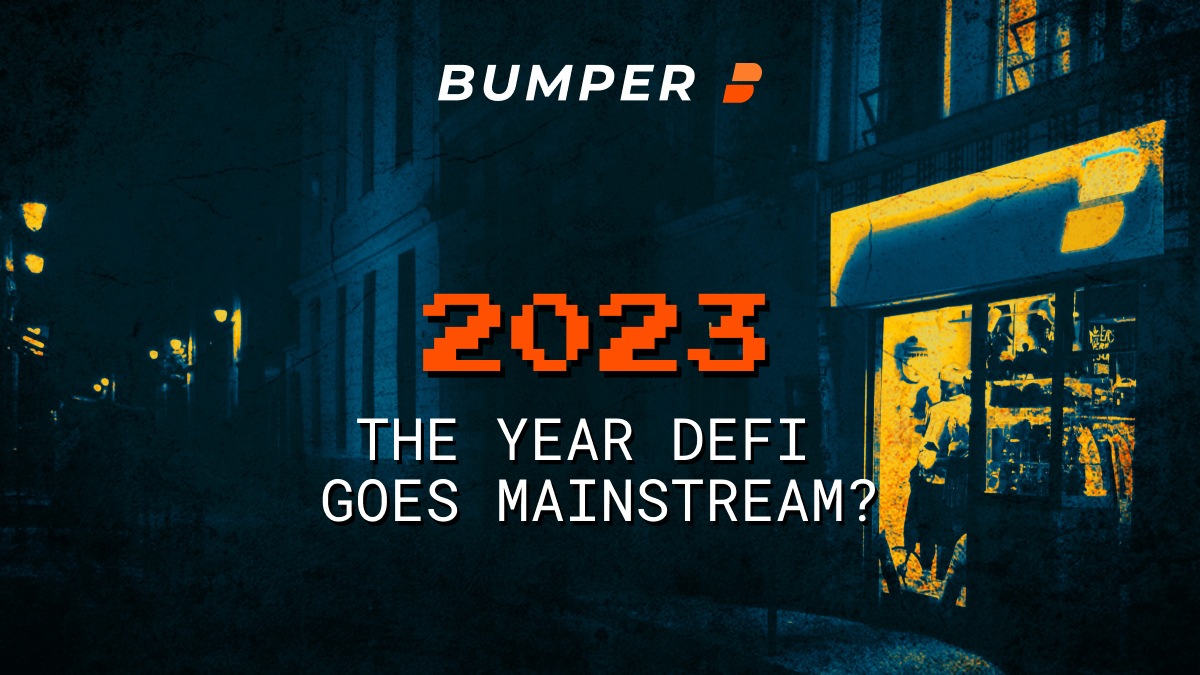 Will 2023 be the year DeFi goes mainstream?

2023 may be the year DeFi goes mainstream - and it will in part be a backlash to corruption in TradFi. 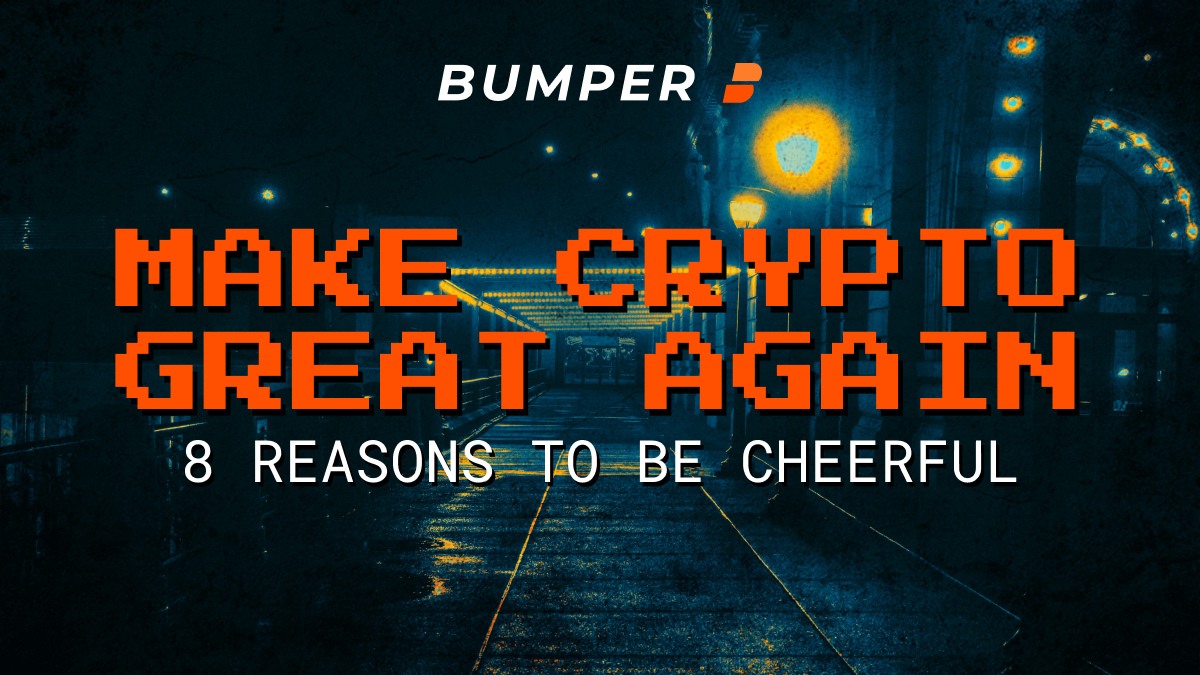 This year in crypto has been pretty grim, but there are reasons to be cheerful about the state of the industry. So let’s be positive and Make Crypto Great Again!