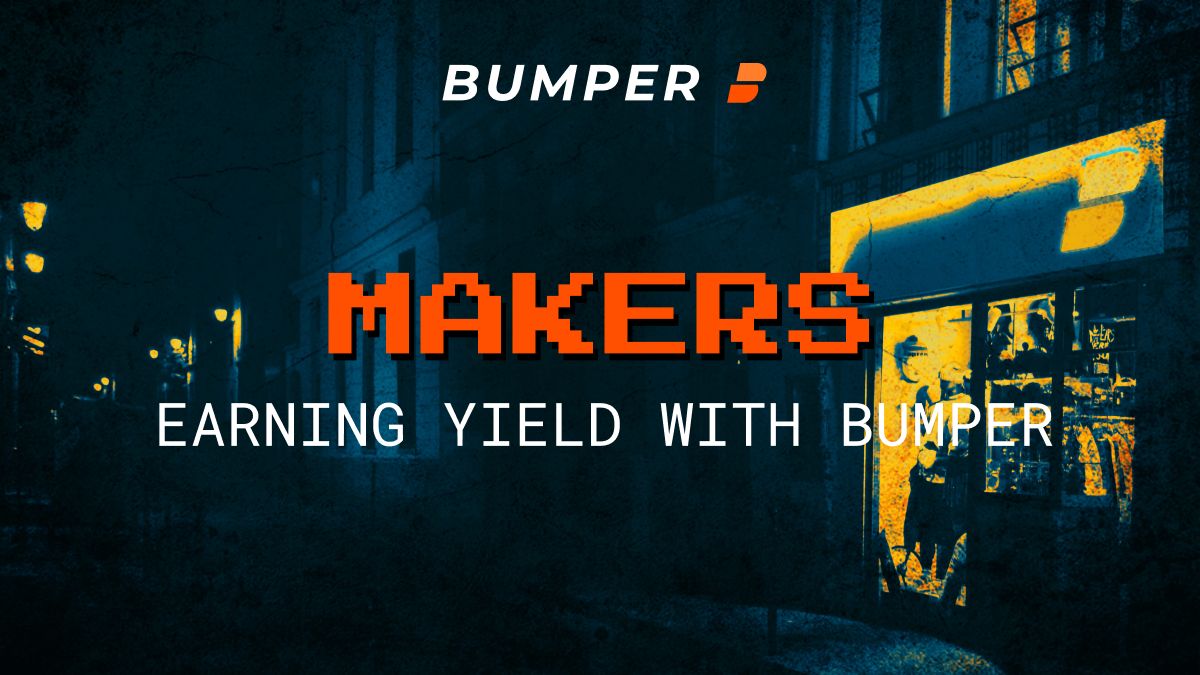 Earning with Bumper - About Makers

What is a Maker?

A Maker is a user who provides liquidity in the form of stablecoins to the Bumper protocol. Makers are incentivised to do so with the potential to earn a yield on their deposits.

Being a maker is akin to being a liquidity provider in other DeFi protocols, in other words, they make money by assuming some risk.

What makes earning with Bumper special?

Bumper’s unique design is different from other risk markets and DeFi protocols. It is built to provide a transparent and provably fair system in which Takers gain price protection whilst Makers earn an attractive yield without without any one user in the pool being adversely disadvantaged.

Interesting note: Bumper actually uses two additional reserve pools which are used for collecting Taker premiums and for rebalancing deposits in order to manage yield and the costs of spread and slippage. The mechanics of this is outlined in more detail in the Litepaper.

When users wish to exit their positions, they make a claim from the respective pool:

What is required in order to open a Maker position?

To open a Maker position, you need to have some stablecoins to deposit, and, just like Takers, you need to bond some BUMP tokens. USDC is the only stablecoin accepted for deposit at launch, with others supported in future versions.

It is very quick and simple to open a Maker position. Connect your wallet and then decide the length of time you wish to deposit stablecoins for, as well as your preferred level of risk tolerance by selecting a Tier.

Like Takers, Makers deposit their stablecoins for a fixed period of time, which is chosen when opening a position. Maker terms range from 30 to 150 days. Makers can withdraw early (This is called “Abandonment”), but will be penalised for doing so.

Conversely, Makers can choose to extend their positions for another term if they so choose, which may be particularly attractive if the yields for that period have underperformed due to extreme volatility

Because Makers are assuming risk in return for earning yield, being able to select an acceptable level of risk relative to other Makers is a feature built into Bumper.

This is achieved by having a Maker select a Tier when opening their position. The higher the Tier chosen, the more risk they assume, but conversely the more relative yield they can earn.

Risk tiers are not absolute, but are relative to other Makers, with the average risk tier being shown in the dApp. In other words, an individual Maker can see what the general level of risk all other Makers are taking before they open their position.

Just as Takers are given a Bumpered Asset token when they open their positions, so too are Makers given Bumpered (bUSDC) tokens, which are ERC-20 tokens representing their position in the Bumper protocol.

These are returned when a Maker position is closed, at which point their proportional share is deposited back to the connected wallet from the Capital Pool.

As Maker deposits are not immediately required for paying out under-the-floor positions for Takers whose terms are shortly due to close, this means there are exists periods of time where liquidity in the Capital pool could be regarded as “idle”.

A portion of these idle funds may be used to engage in external yield farming, with the earnings from this going back into the pool, thus improving the economic performance of the protocol, including increasing yields for Makers. This is determined by the Bumper governance mechanism, ensuring that users have a say in how idle funds may be used.

This means Makers can benefit by collecting yield both from farming AND collecting Taker premiums, all without having to do anything other than depositing USDC tokens into Bumper.

Makers can continue their position by using the ‘renew’ toggle switch on the dApp whilst their position is open. Otherwise, when the term expires, they are rolled into a ‘default’ position which pays a lower yield until they come back to the protocol to manage their position.

In order to open a Maker position, users are required to bond some BUMP tokens.

Under specific protocol conditions, Makers will also earn bonuses on their bonded BUMP tokens. Bonuses are calculated at the beginning of their term and paid out at the end of a term when the position is closed. Incentives are discussed in more detail in the Bumper Litepaper.

Makers (and Takers) make a compulsory contribution to the protocol when creating a position. This is generally known as the protocol fee, and is calculated as an amount of stablecoin (or ETH for Takers).

These contributions go to the Treasury in order to ensure that the Bumper DAO can fund future development.

How Maker yields are derived

Makers benefit by earning premiums which are paid by Takers when they open and close their protection positions.

Takers pay a dynamic fee throughout their term which is calculated based on the measured volatility of the protected asset for the duration of their position. This is discussed in more detail in the Bumper Litepaper and in this article.

Higher levels of price volatility result in higher premiums being charged to Takers. Whilst they don’t know what their final premium will be, the method by which it is calculated is known, making Bumper somewhat different to other price protection systems (such as Options desks)

The Bumper protocol continually rebalances itself based on volatility to achieve an equilibrium designed to minimise collective risk for all participants, whilst still delivering an attractive yield to individual Makers most of the time.

All protocols in which liquidity providers deposit funds in return for rewards carry risks.

In the Bumper protocol, Makers are yield-seekers who assume some risk in return for the benefit of sharing the yields derived from Taker premiums, and additionally yields generated from external automated yield farming.

The main risk for Makers comes from a combination of both a severe and a prolonged downside market scenario, which is likely to result in an increase in claims against the Capital pool by Takers whose positions close under their chosen floor.

However, Makers are not forced to exit and lock in permanent losses, instead they may opt to renew their position, and this likelihood of market conditions reverting incentivises Makers to choose to renew their term until their loss has been zeroed, thus returning a positive yield to the Capital Pool.

Makers are a really important part of the Bumper protocol, which makes it extremely easy for both new and experienced crypto participants to make gains by providing stablecoin liquidity to the protocol and profiting from short term volatility.

Bumper’s novel architecture creates an alternative price risk market to Options markets and Exchange Stop loss trading. In Bumper, all protocol functions are decentralised, making it a transparent, fair and simple self-serve price risk apparatus, with the flexibility  to suit a wide range of risk tolerances and perspectives.

If you’d like to learn more about how the Bumper system works, we recommend reading the Flashpaper and/or our Litepaper to give you deeper insights into how the protocol works.

And if you still have questions, pop along to our Discord server and ask us anything. 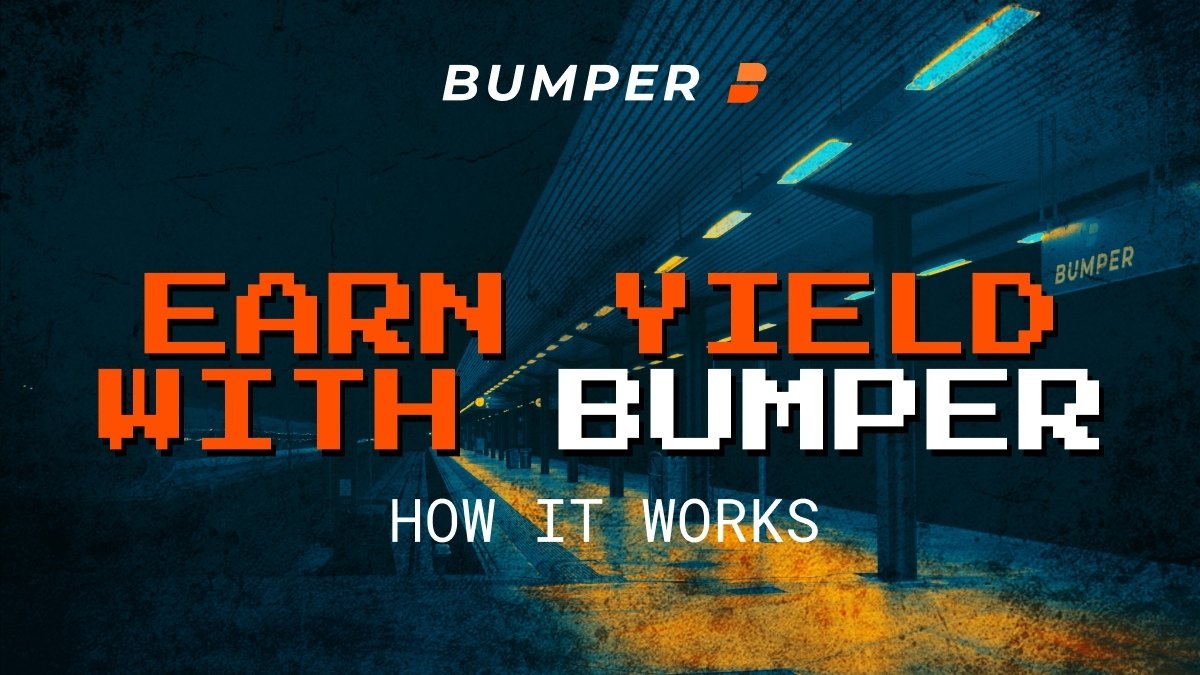 Earn on your stablecoins - How yield generation works in Bumper

Deposit and earn on your stablecoins in a fair and transparent way with Bumper. Find out how yield generation works in the Bumper protocol. 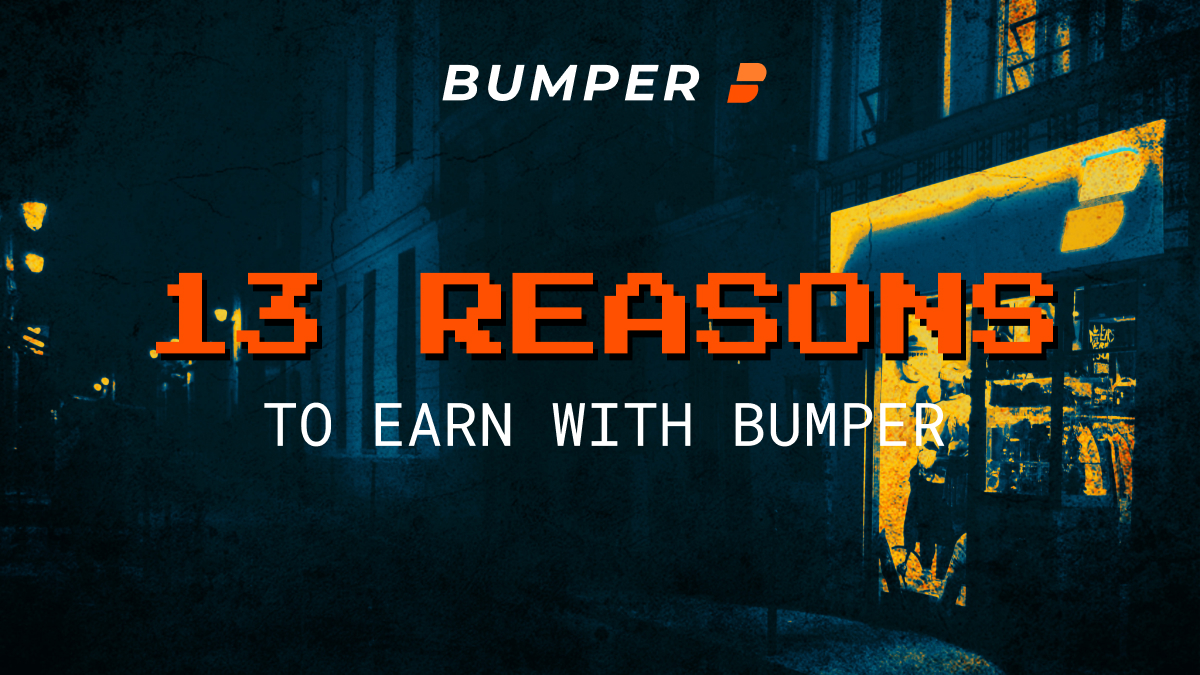 There are so many great reasons to use Bumper to earn a yield on your stablecoins. Find out how to beat inflation and earn a great yield.