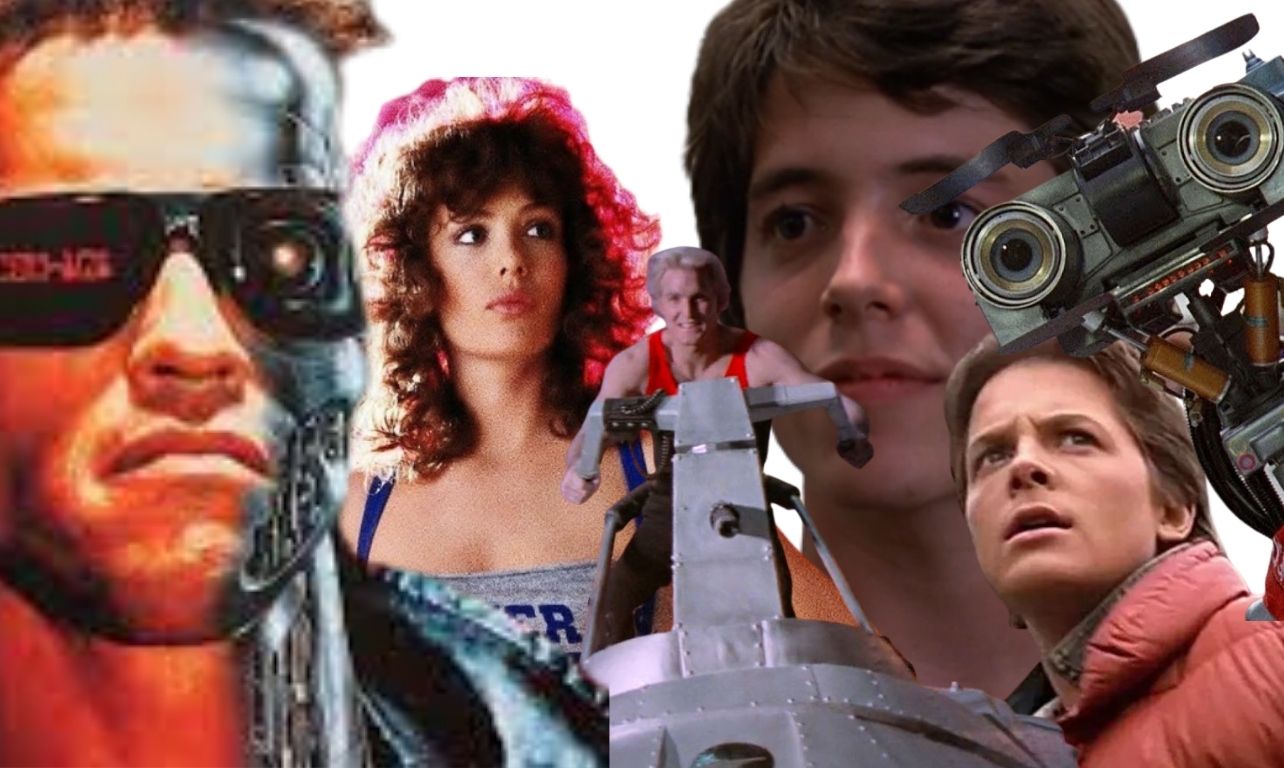 We loved the eighties. Especially the movies.

Perhaps because most of us here at Bumper grew up watching classic 80’s films, and the whole decade brings back a very real sense of nostalgia and connection for us. In fact the entire eighties era (and the 80s movies) have become, not only part of our brand, but totally baked into our culture and they have shaped the ethos of the entire team. Rad!

Eerily Accurate predictions of the future from 80’s movies

One of the great things about classic 80’s movies is that there are some spooky inventions and events attributed to the future, which back then were just science fiction, but forty year later are a very real part of our world, for better or worse.

So, as some of the greatest 80s movies turn middle-aged, here are a few of our absolute fave predictions from some of the best classic eighties films which came true.

Google’s wearable specs aren’t a new idea, and in fact there are a number of eighties classics which got them just right. Firstly, of course, the classic sequel Back to the Future II sees Marty and Jennifer’s kids zoning out and using VR like glasses to chat to their friends at the dinner table. Futuristic dystopian film Robocop also featured a form of smart-glasses, complete with digital heads-up display which appeared in front of the wearer's eyes.

Whilst Google Glass was admittedly a bit of a flop, and you don’t see too many people wearing them, they do allow us to segue nicely to our next prediction.

1980’s games weren’t anything like what you expect now. High definition realistic graphics and smooth multiplayer gameplay just wasn’t a thing back then, but that didn’t stop a number of films from imagining a future which included digital metaverses and live arena combat tournaments.

The obvious example of course is Tron, set in a metaverse, where players are computer ‘avatars’ made in the likeness of their users, and who are forced to compete in live tournaments, with losers being ‘de-rezzed’, which means exactly what you think it does.

What’s more intriguing is that the Tron metaverse is run by a giant evil tech corporation which clearly isn’t averse to a bit of bribery and corruption to satisfy its lust for power in the real world. But, surely in the modern era, there’s no equivalent of this right…?

There’s a number of self driving cars which appeared in 80’s movies, including the red and white Plymouth Fury which has a mind of its own in the supernatural horror Christine, the autonomous ‘Batmobile’ which transported Michael Keaton’s Batman around in 1989 and, with a little nod to the (as yet unrealised) technology of the ‘Spinner’ in Bladerunner.

Also, whilst technically not an eighties movie, we think there should be an honourable mention to ‘Johnny Cab’ from the July 1990 classic Total Recall.

Bladerunner has to rank as one of the most visually stunning films to come out of the entire eighties era, presenting Director Ridley Scott’s dystopian view of the future originally imagined by Philip K Dick in his novel ‘Do androids dream of electric sheep?’.

Partly what makes the film so instantly recognisable are the huge digital billboards which continually churn out inviting and colourful neon ads which sit in stark contrast to the background of the dismal dark cityscape, all set to Vangelis’ (R.I.P.) equally groundbreaking synth-orchestra soundtrack.

Whilst owning a 3D printer may not be a must-have consumable in every home in the modern age (yet), they do exist, and have done for a few years now. But back in the 1980’s, this technology was only a futuristic dream, which was of course the premise for the film Weird Science, in which two hormonal teenage boys ‘3D Print’ their very own virtual girlfriend.

Of course, if it really was possible to mould your very own Kelly Le Brock, we rather suspect there would have been many more sales of 3D printers in the modern age (and Tinder wouldn’t exist).

There was certainly no shortage of killer robots on the big screen during the 80’s, but one stands out head and shoulders (literally) above the rest, and that has to be Swarzenegger’s Terminator in the original 1985 flick.

One of the biggest threats in the modern era is fifth generational warfare, characterised by cyber attacks along with misinformation and social engineering. Does any of that sound remotely familiar?

Well, there’s one film every child of the 80’s remembers which brought the very threat of Nuclear Armageddon to the big screen, which of course required a brainy teenager to fix what the sharpest minds in the government and military couldn’t do. It’s Wargames, of course!

Biometric ID, for example using fingerprints or retina scans to verify a user, is a relatively new and more and more widely used technology, especially in smart phones and tablets. But this idea isn’t new, and a number of our favourite 80’s classics, including Back to the Future 2 and Robocop showcased biometric ID years before it became a reality.

Our favourite, though, has to be the weird Voight-Kampff machine  from Bladerunner, which didn’t so much validate your identity, but determined whether you were human or replicant.

The eighties was definitely the era for AI to make an appearance in film. Of course, there are many movies which feature AI we’ve already mentioned, but let’s give a nod to the greatest AI bot with the most acute sense of humour. It has to be, of course, the beloved Number Five from Short Circuit. He’s Alive…!

Doing your banking online is very much a given in the 21st century, but back in the eighties, as the internet was still young and mostly the purview of university nerds, it wasn’t a thing.

But that didn’t stop some of the classic films from imagining digital money. In Back to the Future II, a man approaches Marty with a handheld device and asks if he'll donate to help save the clock tower. Once again, art imitates future life, showing what we would now refer to as Fintech, many years before it ever became a reality.

WHAT THE 80’S DIDN’T PREDICT

Mobile phones did exist in the 1980’s, most fashionably the ‘brick’ phone sported by Gordon Gecko in Wall Street, and also by Danny Glover carrying the huge ‘suitcase phone’ around in the 1989 shoot-em-up Lethal Weapon.

In fact, the concept of connected-to-everything mobile device is surprisingly absent in movies from the 80’s era. Even the Back to the Future franchise, which is pretty much the go-to film for predictions of modern day gadgets didn’t envisage the computer built into the phone.

Perhaps you could argue that Star Trek had a version, but the multi-purpose Tricorder didn’t make it into any of the films of the eighties era.

Probably the most interesting invention which none of the classic 80’s films predicted was crypto. It’s hardly surprising, though, as Satoshi Nakamoto’s groundbreaking whitepaper entitled “Bitcoin: A Peer to Peer Electronic Cash System” didn’t transform the world of money as we know it until 2008, essentially a good thirty years after our favourite 80s movies were made.

As cult author Robert Anton Wilson suggested, over the last few decades, the doubling of human knowledge, capability and innovation just keeps on accelerating. In the years since Nakamoto dropped the whole Bitcoin concept, the development in novel products and solutions enabled by blockchain technology has been vast, as demonstrated by the release of thousands of crypto’s and the emergence of new DeFi protocols which, whilst still in the early days, are challenging the established order of traditional finance and the associated institutions.

One of these new DeFi services is of course Bumper, a unique protocol which protects the price of your crypto during those annoying times where downside volatility bites. Not only that, but Bumper has taken the initiative to go back to the eighties, adopting the culture of the age into our brand and identity.

Because for those of us who actually grew up in this period, we all remember it as a great time to be alive, in a time which we generally think of as a new era of enlightenment, certainly when it came to both films and technological advances.

Whilst we don’t know what the tech advances of the next few years will look like, especially in the cryptosphere, we all hope that everyone continues to enjoy and remember the 80s as fondly as we do.

Find out more about Bumper, and how we have developed the most bodacious and excellent DeFi protocol. And do come and join the Discord community, where we regularly talk about (and meme) our favourite classic 80s flicks.